from Master by Coolies 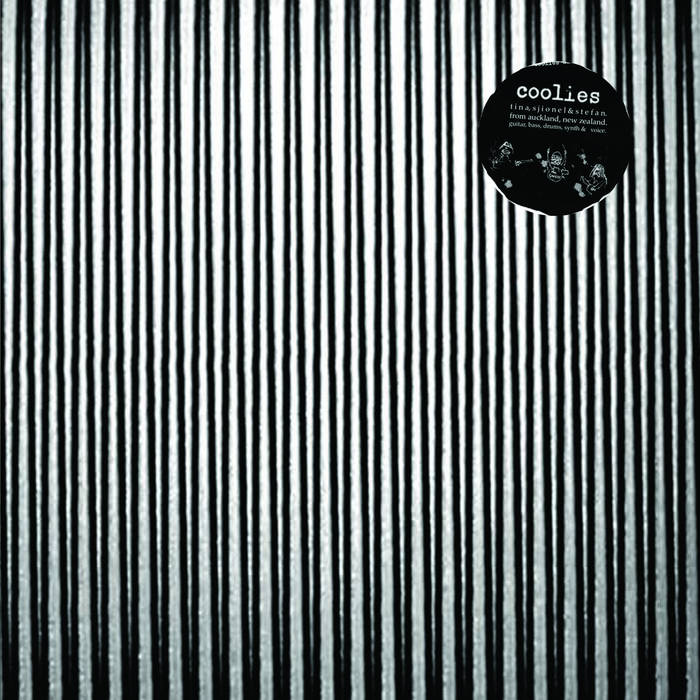 In the beginning, there was South Auckland’s own the Coolies, three teenage school chums
Tina, Sjionel and Melissa playing the kind of racket that might have caused Johnny Rotten himself to spin in his grave, had he actually been dead (might as well have been).
Back then in the mid/late nineties, the Coolies’ punk/rock'n'roll/punk was inspired, it must be pointed out, by nobody...nobody at all. Nonetheless, their signature was a sweet and swinging rah-rah sound (a rah-Ramones/rah-Ronettes car-crash). at, and a burning teenage desire to actually burn things down...no fucking joke...statute of limitations.
e trio recorded a 10-song tape on a ghetto blaster...the tapes circulated Auckland’s oh-so-hip & scenester K Road and the Coolies built up a cult following amongst the crowd who were, er, not their peers at all. For a while, the band played support to virtually every decent touring band to come thru AK, and a bunch of terrible ones who deserve their fate languishing in obscurity... maybe caused a problem or two, who cares now.
Eventually they got it together to release a self titled 7'', with timeless fucking hits Madonnas the Bomb, Yr So 1960s, Go! Hot Metal and Pimpmobile. Also around the turn of the century Kill Rock Stars put a Coolies song on the Fields And Streams compilation which at the time was a big deal. So, not for the last time, the Coolies seized defeat from the jaws of victory & Melissa split.
e Coolies either took the first of many breaks or just couldn’t be fucked carrying on. In 2004ish, Tina & Sjionel recruited Fiona to “man” the drums...a real life drum machine. e Coolies ripped up the plans & returned with a fresh new sound for a new-era/new/no/wave?...Sj switched it up with synth and samples, Tina stuck with basic blitzkrieg guitar & blah blah lyrics. With a new buzz, the Coolies set off to take on the world. Like lightning, they were releasing a self-titled album (produced by nobody), and touring NZ, Australia + America a bunch (bands played with: EraseErrata/TotalShutdown/ArielPink/Bobbyteens/Wives/MikaMiko/WeirdWar/ XBXRX/Coachwhips/Deerhoof, all that kinda stuff). Later, the trio put out a tour EP, Bless the Babies And the Mothers, which was well received in the SF region, or so they were told...oh and while in NYC the BJJ took their drummer away...Coolies implode/another hiatus/stop/start/ start/stop make your own rules.
Mid-decade the Coolies were on the verge of uncertainty, re-evaluating the situation. Is this horse dead??...quite possibly...Sjionel and Tina wanted to take it back to their original reason for playing...fun and trouble...so they decided to recruit legend mate and drummer Stefan (of Pumice un-fame: ps he's released over 20+ records in different bands over the years, he is the underground!!!)
First show playing with Stefan was at Sjionel’s house with Calvin Johnson to a bunch of indies and after that they knew two things: one, Calvin Johnson is a jabbering nutbar, and two: this reinvigorated line-up was the perfecto scenario band-wise...new/old attitude to music/under- ground noise staple/post punk/oioioi like a Shangrilas and Crass tea party. Finally the songs that they always wanted to write were writing themselves and the Coolies were excited to play kinda like the anti-sound...old/new...cliché, good/bad, whatever/who cares stop/start again.
That was four years ago (in 2010). So this album Master is a collection of the first four years. Raw, lo-fi, annoying, brilliant, monumental, totally necessary, nothing to do with anything, what u always hoped would never happen, what u never hoped could always happen, the end of music, the begining of the future, set in the past, god sent, Richard Dawkins, birthday party, inhouse joke, our life in your hands, our hands on our hearts...An accumulation of recordings, recorded and mixed etc by Stefan Neville reel to reel at random places around Auckland....mastered by Rachel Shearer (Lovely Midget) and loved by all...