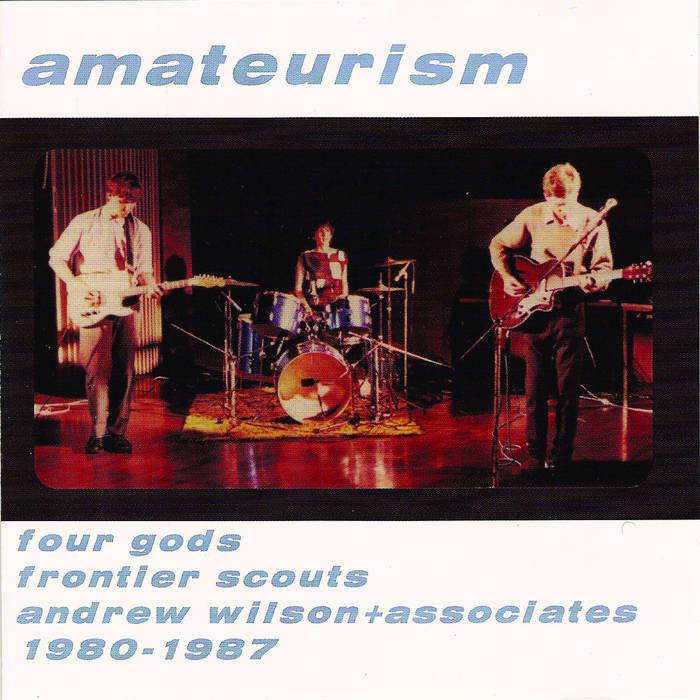 Andrew Wilson began his musical career in Brisbane in the late 70s during the same fertile period that produced the Gobetweens, the Saints and the Laughing Clowns. His first band the Four Gods played regularly in dingy Brisbane pubs and venues with the Gobetweens, and Wilson struck up a lasting friendship guitarist/singer Robert Forster.

When it came time for the Four Gods to record their first single, Wilson suddenly found himself in Sydney without a band (for various reasons), so quickly roped in the Gobetweens’ Lindy Morrison and Grant MacLennan (who used an assumed name) and came up with the 1980 single Enchanted House/Restless, the last record to be released on the Able Label, home to the first two Gobetweens singles as well as The Return Of The Hypnotist by the Apartments.
Stylistically, The Four Gods single carried the torch for the kind of wiry, angular, articulate pop that the Gobetweens were moving away from even then (towards a lusher, more romantic style), and this remained the blueprint for Wilson’s music throughout the 1980s.

Now living in Sydney, Wilson formed a new band the Frontier Scouts in 1982, who released a single and a twelve inch EP on the then nascent Au Go Go records. The single contains perhaps Wilson’s defining moment When Daddy Blows His Top, while the twelve inch included an appearance from the Triffids’ David McComb on “feedback guitar” and saw Wilson’s songwriting developing and maturing into richer, gentler forms.

Wilson’s final recording was another 12” EP self released in 1987 under the name Andrew Wilson and Associates, which included contributions from Steve Miller of the Moodists and Robert McComb of the Triffids. A moodier, more acoustically based affair, it was a low key swansong for one of the most intriguing – and sadly neglected – songwriters in Australia. Wilson gave music away in the late 1980s and is now a successful architect.